Secrets of The Knight

Secrets of the Knight 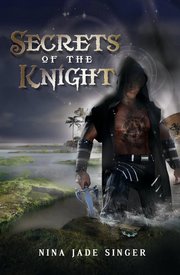 Several years ago life forced Thomas (Bo) Bowden to give up everything, including the woman he loves, and take refuge on a Caribbean island. Little did he know, he was taking the first step to fulfilling his mystical destiny.

Nicole Balian has come to the small island of Trenado to find a missing teenager. She's shocked to the core to find her former lover instead. And the attraction between her and Bo is as strong as ever.

Working together to solve the unexplained disappearances plaguing the island, they find themselves in a frightening world of voodoo and magic. Trenado's history is shrouded in supernatural mystery. The danger they face serves to reignite their love. But as Bo fights an ancient evil that haunts the island, will Nicole be able to save the man she loves? Or will she lose him once again, this time forever?
Buy Links
Amazon
B&N

SECRETS OF A KNIGHT by Nina Jade Singer is a paranormal romance story.

Thomas Bowden couldn’t handle, when he changed. But how had he changed? Who changed him? He had left his fiancée and his life back in Chicago and moved to a small island in the Caribbean. Once there, he could see in pitch black dark night. He couldn’t stand the daylight now. And he had splitting headaches when he had visions from the future. Then the Police chief called him in!

Young tourist girls were being kidnapped from the island. And one of the girl was found alive but she was not talking about what had happened. She just wanted her friend to be called. Her friend, Nicole Balian was Bo’s ex-fiancee! She wanted answers from Bo too. Why did he leave the perfect life with her and get to this tiny island?

And what was happening on the island? Why were these young girls being kidnapped? And now who was after Nicole and her unborn child? Most of all, how had Bo become a Knight?

Secrets of a Knight is a paranormal story which will keep readers on the edge of their seats and keep turning pages late into the night. It has witty dialogue, humor with steamy sensuality with heart-tugging pathos.

Nina Jade Singer brings this paranormal story alive with vivid imaginary. This steamy tale is a gripping story of second chances, past secrets and taking a chance on eternal love!


Posted by Romance Book Paradise at 17:12

Taking Your Name Out There!

Get Your Copy Of SECRETS OF THE KNIGHT

SECRETS OF THE KNIGHT

Get Your Copy Of SECRETS OF THE KNIGHT!